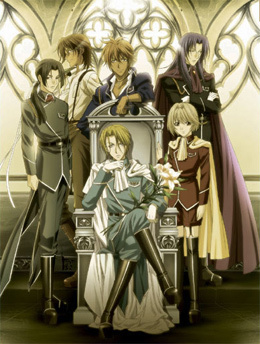 Meine Liebe is a series of Dating Sims for girls by Konami, set in a fictional country in the '30s which uses an interface similar to Tokimeki Memorial; as such, it's one of the Spiritual Successors of the Tokimeki Memorial series, and the granddaddy of the Girl's Side branch of the series.

In the games the main girl tries to woo one of several Strahl candidates. These Strahl candidates are members of an elite class at Rosenstolz Academy of which graduates become advisers to the king of Kuchen, an island off the cost of Europe.

However, slightly more well known is the anime series by Bee Train. The anime series reduced the main character of the games to cameo appearances and focused exclusively on the Strahl dealing with various political maneuverings. It was followed by a sequel series Meine Liebe Wieder where the headmaster disappears and a new headmaster is instated who installs radical changes in the Strahl class while dealing with Ludwig being accused of treason and a plot to sell out Kuchen to foreign powers.

There is also a manga series which is closer to the games. It features Erika Kraus who is looking for her brother she was separated from at Rosenstolz Academy. She becomes assistant to the Strahl because one of them may be her brother. Hopefully not the one she is falling in love with.