Visual Novel / Her Love in the Force 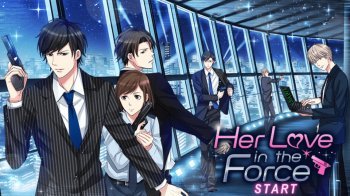 Her Love in the Force is a Romance Game Visual Novel by Voltage, Inc. for iOS and Android devices.

The protagonist is a rookie cop from a small Japanese village, who dreams of becoming a detective. A chance to fulfill that dream comes to her, and she suddenly finds herself enrolled in the prestigious Public Safety Police Academy in Tokyo, a school exclusively populated by men. The instructors are all elite detectives in the Tokyo Metropolitan PD, with a reputation for being sadists of the highest order, who have made it their sole mission to put all the students through the ultimate Training from Hell in order to train the next generation of ace detectives.

During her first week, the protagonist is given a chance to become a full-time aide to one of the instructors, whose orders are to be obeyed without question: Seiji Goto, the ace detective; Hyogo Kaga, the arrogant and cruel captain; Hideki Ishigami, the cold and emotionless demon instructor; Ayumu Shinonome, the Insufferable Genius with a knack for hacking; and Shusuke Soma; the enigmatic lieutenant that teaches Kendo. While she juggles her training, her academic duties and her duties to her instructor, the protagonist finds that there's more to the stern instructors than meet the eye.

Despite the title, this work has nothing to do with the metaphysical concept from Star Wars.