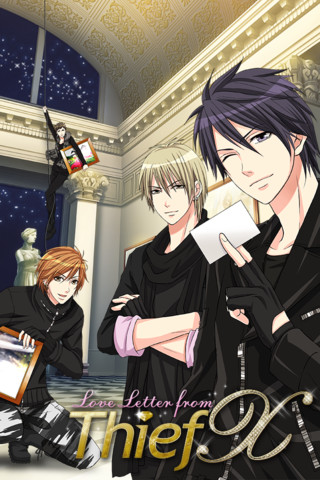 Love Letter from Thief X is a Romance Game Visual Novel by Voltage, Inc. for iOS and Android devices. A Westernized adaptation has also been released by Voltage USA under the title My Lover's A Thief.

The player takes the role of a museum curator whose life is turned upside down when the Black Foxes, a group of infamous art thieves, break into the museum where she works - looking for her. The Black Foxes insist that they need her help to solve the mystery left behind by her grandfather, a famous artist whose hidden work could prove to have priceless significance... and they won't take no for an answer.

The Black Foxes don't seem like bad guys, but is it really okay to fall in love with a thief? Especially when it means lying to the police detective assigned to catch them, who happens to be the protagonist's childhood friend?

In November 2017, Love Letter from Thief X was transferred into Voltage's Love 365 app.