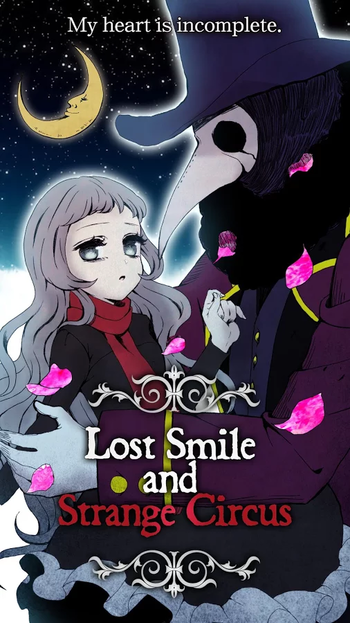 No matter how it looks, it's not a Romance Game
Advertisement:

Lost Smile and Strange Circus is a game for iOS and Android, released in 2017 by SEEC inc. The game follows a young girl called Noah, an orphan, who has been surrounded by misery all her life due to her not being able to smile. She eventually runs away from her orphanage, but just when she thinks she's free some strange men try to attack her. Thankfully a mysterious man called Oddman comes to her rescue and takes her into the 'darkness' where he is the master of a circus of other wayward souls.

The gameplay consists of tapping on the screen in order to attract 'Audiences' (little black creatures whose purpose is not made quite clear), which you can later use to buy pictures, lamps, boosters, and all sorts of things. You can also unlock more performers using this audiences, which will increase the amount of audiences you can automatically produce, and invite audiences to each performer's stage, which will also increase the number of audiences you automatically produce. Over time different circus members will appear on the 'main' screen (where you tap the lamp) once you've unlocked them. The first time you click on them you'll obtain a picture (necessary in order to complete the game), and next time they appear you'll be able to watch 'TV' (an ad) in order to get a scarlet stone. Once you have all pictures from all members (not including the member notes) you will reach the ending. There's also the 'Flower of Chera', a place where you feed audiences who 'have fulfilled their purpose in life' to a flower as fertilizer, which will unlock 'something special'.

The game is fairly short, and with enough patience can be finished in one day. It can be found on the Google Play Store for Android.

minor note  As it is an in-house translation, the game can be confusing at times due to things not being translated well from english, but overall it is still understandable.