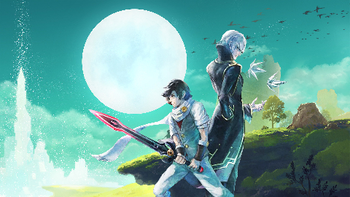 Restore memories to save a fading world.
Advertisement:

Lost Sphear is a JRPG by Tokyo RPG Factory, the makers of I Am Setsuna. It was published by Square Enix and released for PC, PlayStation 4, and the Nintendo Switch on January 23rd, 2018.

The game revolves around memories, which shape the entire world. When someone or something is forgotten, the person, place, or thing fades from existence as if it had never been. When the hero, Kanata, learns he has the power to bring back forgotten things, he and his friends are tasked with restoring the lost world and stopping whatever causes things to disappear.

Like I Am Setsuna, the game features an ATB battle system similar to the older Final Fantasy titles.