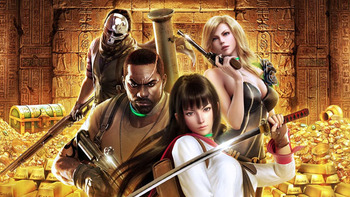 Lost Reavers was a free-to-play multiplayer co-op (up to four players can play) online game released exclusively for the Wii U. It was developed and published by Bandai Namco Entertainment and released through the Nintendo eShop.

Gameplay pertained to choosing one of four playable characters - Sayuri, Dwayne, Victoria, or ShadowStalker - and embarking on missions together in order to retrieve treasures known as Relics and bringing them back to claim their rewards. Along the way to completing the mission, players would be faced with solving multi-room puzzles, defeating undead mooks, and giant bosses that stand in their way.

This video game provided examples of: