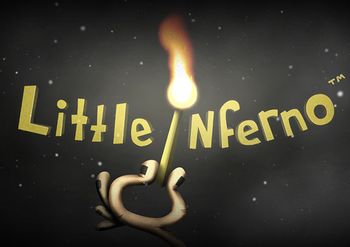 Little Inferno is an indie sandbox game made by Tomorrow Corporation for iPad, Steam, Wii U, and Nintendo Switch.

The game takes place in a freezing world, one that is getting inexplicably colder with every passing day. As a solution, the sinister Tomorrow Corporation sells the Little Inferno Entertainment Fireplace. All that is needed are some things to burn, and a couple of complimentary catalogs, given to the player at the start.

The story is told via a series of letters sent from different characters you meet along the way: Sugar Plumps, a little girl who is in the same situation as you, a pen-pal named Miss Nancy, an employee from Tomorrow Corporation, a figure called The Weather Man, and a mysterious figure. Throughout the game, you burn items and spiders that crawl through the fireplace, get coins, then buy and unlock various new things to burn from the aforementioned catalogs. True to the real world, you have to wait for the items to arrive, but usually do not surpass a minute, and can be sped up with stamps that are collected from burning things. There is also a combo system in place that is sometimes required to move on to unlock the next catalogue. The combos are fairly easy to figure out; for instance, Alarm Clock + Instant Seed Packet = "Springtime".

in late 2012. The soundtrack is available here,

and the fansite is here.

It's little Trope-ferno just for me! *Head Explodes*
Feedback

The eponymous fireplace of Little Inferno is powerful enough to consume virtually anything in its fires, and the player is encouraged to throw in things like batteries and chainsaws.

Example of:
My Little Panzer

The eponymous fireplace of Little Inferno is powerful enough to consume virtually anything in its fires, and the player is encouraged to throw in things like batteries and chainsaws.