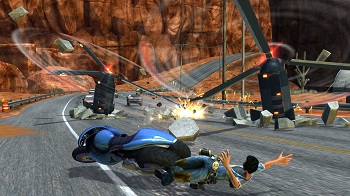 "That's the spirit, Pablo!"
So, a secretive summit of world leaders have gathered to witness the unveiling of two artificially intelligent weapons-grade motorcycles - I.R.I.S. and S.P.I.K.E.. Unfortunately, a thunderstorm immediately hits, with I.R.I.S. taking a bolt to the circuits and appearing to be damaged. It's up to a mechanic by the name of Pablo to repair her...
Advertisement:

...at least until I.R.I.S. suddenly wakes up, notices a commercial for a motorcycle rally in [SCOTTSBURG, INDIANA] , and immediately takes off with Pablo caught in her back wheel. Completely unaware of the language barrier between them, I.R.I.S. sets off on a lengthy road trip to the rally, and won't let something petty like the military or indeed S.P.I.K.E. stop her.

LocoCycle is a third-person action driving game developed by Twisted Pixel, and released in November 2013 for the Xbox One, and then for the PC and 360 in February 2014. Not only does it combine third-person highway driving with beat-'em-up elements, but is also notable for featuring full-motion video for its cutscenes, featuring roles filled by Lisa Foiles, Freddy Rodriguez, Robert Patrick, Tom Savini and James Gunn.