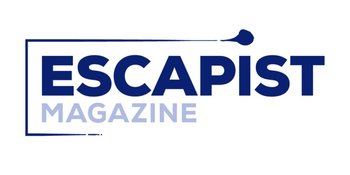 is an online gaming/geek lifestyle magazine. It was launched in 2005, but the site truly took off when it began hosting video content with its recruitment of Yahtzee Croshaw's Zero Punctuation in 2007. The site has an active forum community and pulls in writers and columnists for all sorts of op-eds in its free, weekly "features", but most tropers will know the site for one of its hosted series.

Escapist-produced works with pages on this wiki include:

...and have included in the past:

The large number of creative people on the Escapist's payroll often leads to cooperation, guest appearances, and in-jokes, detailed in the pages above. It can generally be assumed that anyone who makes content for the Escapist has met or spoken with most of the creators who shared their tenure. That being said, there is not a unified "office" for this freelance work, which is spread over the English-speaking world.

In October 2017, the Escapist lost all creative staff except Yahtzee, and was generally considered by remaining editorial staff to be on its death bed.

This all changed in mid-2018, when one of the former leads of the site recovered full rights to it and sought to bring back some of the former shows and staff such as Moviebob and Critical Miss.