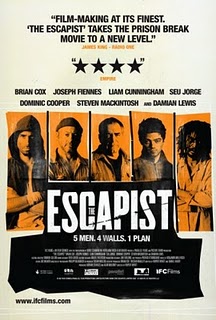 The Escapist is a Prison Break drama film set in a British prison and revolving around Frank Perry, one of the oldest inmates who has long since given up hope. When he finds out his beloved daughter has become a drug addict and is near death following an overdose, he decides he’s to break free. He formulates a plan to escape, and the twin narratives of planning the escape and the actual escape are played simultaneously.

The film was very well-received despite limited release, and it finally gives the incredible Brian Cox a starring role. The rest of the cast includes Damien Lewis, Joseph Fiennes, Dominic Cooper, Liam Cunningham,Seu Jorge and Steven Mackintosh and a minor role by the man who would become Sheamus.

The Escapist provides examples of the following: