Film / Encounters at the End of the World 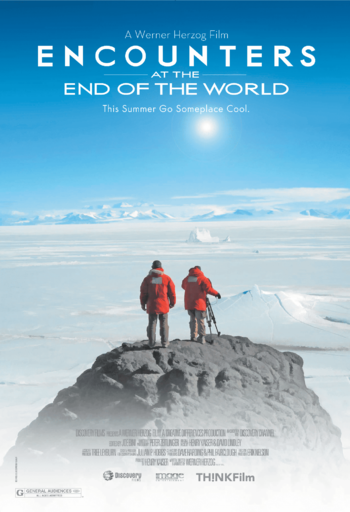 "The National Science Foundation had invited me to Antarctica even though I left no doubt that I would not come up with another film about penguins."
— Opening narration
Advertisement:

Encounters at the End of the World is a 2008 documentary feature written and directed by Werner Herzog.

It is a documentary about life and nature in Antarctica. Herzog arrives at McMurdo Station, the principal research and lodging facility on the continent, and spends a lot of time interviewing the various unusual people who have made careers out of living in the most inhospitable place on Earth. He then ventures into the interior, interviewing seal researchers, microbiologists, and a penguin scientist, among others. All of this is paired with photography of the vast Antarctic frozen wilderness and Herzog's idiosyncratic narration.