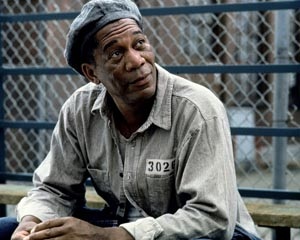 Get busy livin', or get busy dyin'.
Freeman plays "Red" Redding, a lifer who knows the ropes at Maine's 'Shawshank State Prison'."
— From the DVD blurb for The Shawshank Redemption
Advertisement:

You'll find him in just about every prison film and television series ever made. He's the old convict that's been inside as long as anyone can remember—maybe he even received a Longer-Than-Life Sentence. He knows everything there is to know about how the prison works, and can explain it to new inmates. He tends to have the respect of most of his fellow inmates, except maybe the Ax-Crazy psychos. He's probably even on friendly terms with the guards or warden, and may have been appointed a "trustee" with certain privileges if he's stayed out of trouble long enough. Oftentimes no-one (except himself) knows just what he did to end up here, and wonders just why he belongs in jail.

If the central characters decide to break out, the Old Convict probably won't go with them, realising he no longer knows how to survive in the outside world. He may die at the hands of the authorities or vicious fellow inmates (maybe in an attack actually aimed at the hero), inspiring the heroes to either escape or seek vengeance. Compare the Almighty Janitor.

Only occasionally related to The Con or the Con Man.