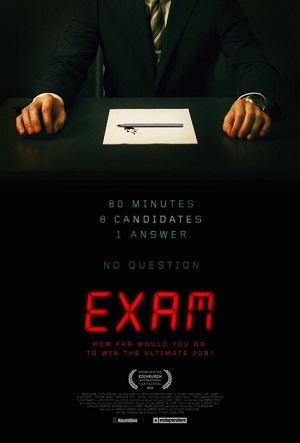 Exam is a 2009 Psychological Thriller starring Colin Salmon, Pollyana McIntosh, and Jimi Mistry about eight job applicants vying for an amazing (but vague) position in a mysterious but powerful company. They are put into a room, and a speech is recited to them:

The eight of them are left in the room with a security guard, while a clock runs down for eighty minutes. But not all is what it seems, and things get messy quickly.

Because of the heavy plot, spoilers will be unmarked.