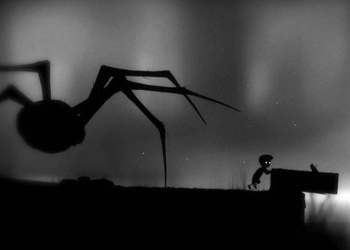 Look Behind You!
"Insects are a recurring theme in the game, because that's exactly what you are: a tiny, scared, insignificant insect, gazing up incomprehensibly at the towering food chain at the bottom of which you lie."
— Zero Punctuation
Advertisement:

Limbo is a 2-D puzzle platforming horror game, and the debut release from Danish independent game studio Playdead. It was originally released in July 2010 on Xbox Live Arcade, becoming the third-highest selling game on the service that year, and was later ported with additional content to the PlayStation Network, Steam, Android, iOS, and the Nintendo Switch.

The game's story is simple: you control a nameless young boy in Limbo, searching for his sister. There is no dialog or text of any kind to guide you — just the boy and a really, really horrible environment. There are many deadly puzzles, challenges and traps that can get you killed in shockingly violent ways. (A gore filter can make the deaths less grisly, but no less terrifying.) When combined with the protagonist's limited moveset — he's entirely unarmed and can only jump, push/pull objects (like boxes and levers), climb ledges, and swing on ropes — Limbo's sense of helplessness and trepidation is intense.

Something of huge contrast and surprise between regional ratings, the ESRB somehow let the game pass with only a T for Teen rating, while PEGI gave it an 18, the strictest rating they have. If you see the more graphic deaths (though, to be fair, they're all completely silhouetted), you'll understand why some think the ESRB would have, or even should have given it an M for Mature rating instead.

Players draw many comparisons to Braid, another short indie platformer with a unique art style and an unorthodox narrative examining gameplay tropes.

The next Playdead release, 2016's Inside, largely functions as a Spiritual Successor to Limbo. It's very much in the same style — a young boy explores a dangerous and hostile world

, but the setting this time is an incomprehensibly large facility of some kind, and it uses a more realistic art style rather than the silhouette style of Limbo.

Do not confuse with Limbo of the Lost, although that's pretty terrifying in its own special way. Also unrelated to the animated web series Limbo.