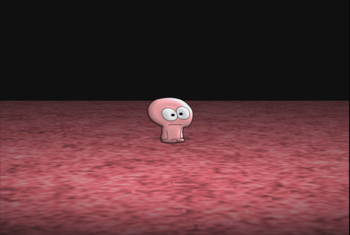 Created on his Dark Cheese channel, Limbo is an animated series concerning the adventures of a small pink humanoid in limbo- the series starting the instance he is "born,". In his adventures he meets two friends of sorts- a rude and abrasive floating green orb, and a quiet ugly looking grey creature with his mentally challenged sister growing out the back of his head. The series can be described as quite weird, with trippy visuals and odd character desires.

The episodes deal with various topics, such as kangaroo courts, prohibition, religion and immigration. Though the messages of the episode might be hard to spot at first glance. Or second. Or third. Since the characters are not given names, for the sake of convenience, they will be referred to as "The pink guy,", "The grey guy," and so on, until canon names are provided.

The series can be watched for free here

. Mike's other works can be found here

. Mike has hinted in interviews that he does plan on making a third series.