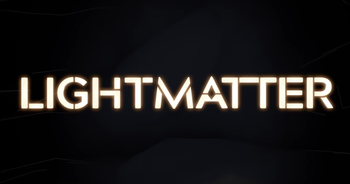 Congratulations! You've been invited to the launch day tour for Lightmatter, the world's first infinitely renewable energy source! Unfortunately, the cornerstone of our operation, the CORE, has been a little overloaded and caused a catastrophic accident, but it's fine! Just make your way out of the facility in a nice and orderly fashion and keep yourself in one piece. You may notice some peculiar effects like hair loss or headaches while navigating our headquarters, but that's perfectly normal.

Oh, and by the by, please keep out of the shadows.

Lightmatter is a first-person Puzzle Platformer Indie Game created by Tunnel Vision Games and released on PC via Steam on January 15th, 2020. Lightmatter puts you in the shoes of a Featureless Protagonist who awakens after an accident in Lightmatter Technologies. Having been left behind in the facility, you must now find your own way out, with only the guidance of the egotistical CEO of Lightmatter Tech, Virgil (David Bateson), to assist you.

However, there's a bit of a snag in your escape: the shadows will eat you alive. Literally. To escape, you must light a way home, using any source of illumination that you can get your hands on: environment, lamps, photon beams, you name it, to solve scores of puzzle rooms impeding your path. Using the light and a little ingenuity, you may just be able to get out without a scratch. But be warned, as nothing in Lightmatter Tech is as it seems, and the dark hides many secrets...