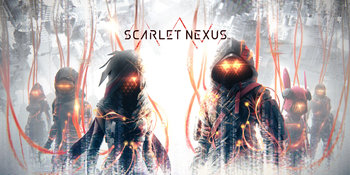 Scarlet Nexus is an Action RPG developed and published by Bandai Namco Entertainment for the PlayStation 4, PlayStation 5, Xbox One, Xbox Series X|S and PC. It was released on June 25th, 2021.

In the far future, a psionic hormone that grants Psychic Powers to humans is discovered, changing society in the process. However, at the same time, humanity suddenly comes under attack by extradimensional monstrosities known as Others, who thirst for human brains. Humans granted powers, known as psionics, quickly became the last line of defense against the otherworldly foes, and to this day are scouted as recruits into the Other Suppression Force, or OSF.

Players assume the role of OSF members Yuito Sumeragi or Kasane Randall, as they explore the futuristic region of New Himuka, which is under attack by the Others.

An anime adaptation animated by Sunrise followed in July 2021.