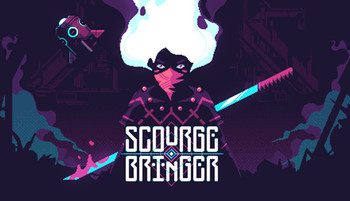 and released on Xbox One, Nintendo Switch, and the Steam, Epic, and GOG stores on October 20, 2020. It's now available for release on PlayStation 4 and Play Station Vita on April 22, 2021.

An evil structure known as the ScourgeBringer has brought desolation and destruction to a once-flourishing world. All who have entered it have never returned. In desperation, a young woman named Kyhra is chosen to brave the ScourgeBringer and hopefully defeat it once and for all.

Armed with only a long sword and a trusty Attack Drone, the player must explore a randomly-arranged maze of rooms and use their agility and quick reflexes to kill all the enemies in each room. Various powers and blessings can be obtained along the way to increase your deadliness. At the end of each level is a powerful Judge who guards the exit.

Kyhra has a number of useful combat abilities which must be mastered in order to succeed: