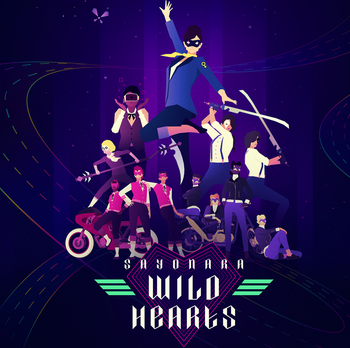 Sayonara Wild Hearts is a story-driven Rhythm Game/Endless Running Game hybrid, developed by three-person Swedish independent studio Simogo, and published by Annapurna Interactive. It was released on September 19th, 2019, for Nintendo Switch, Playstation 4 and for iOS devices and PCs through the Apple Arcade.

Once upon a time, another, harmonious universe existed beyond ours, called the Astral Highways, and three divine beings called The Empress, The High Priestess, and The Hierophant, watched over it. One day, Little Death of the Arcanum teams up with the Dancing Devils, the Howling Moons, the Stereo Lovers, and Hermit64 to steal all the love for themselves, sealing it away in their wicked hearts. In response, before fading away, the Divine Trio set out to create The Fool to combat them, calling forth a heartbroken woman to bring balance to all. All though the power of music.