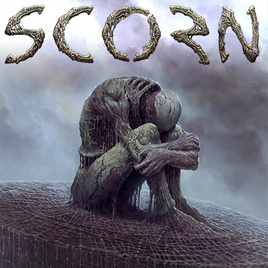 Scorn is an upcoming First-Person Survival Horror game by Serbian developer Ebb Software set in a universe directly inspired by the works of Zdzisław Beksiński and H. R. Giger. The concept is that the Player Character is thrown into this world and has to explore it while solving puzzles and occasionally fighting off monsters in order to better understand the literal nightmare they're in, and possibly escape.

The game was planned to release in two parts; the first, Dasein, in October 2018, and then 2019, but in addition to being delayed to an unspecified date in 2021, the game has had its two parts put back together into one game rather than being released episodically. The game will be distributed through Steam, Windows Store, as a DRM-free download, and on Xbox Series X.

Trailers can be found here.

Tropes that apply to Scorn: