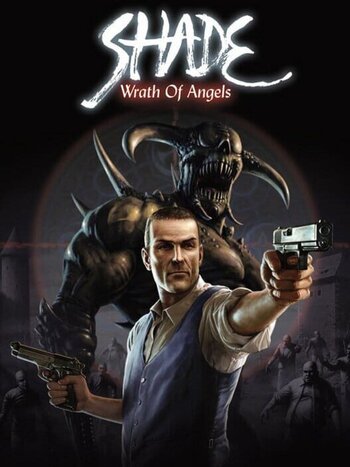 Shade: Wrath of Angels is a 2004 Hack and Slash-Action RPG hybrid made for the Microsoft Windows.

You are an unnamed mercenary and soldier who received a letter from your brother (also unnamed, though online sources identifies him as "B"), an archeology student currently in Eastern Europe, asking for you to attend an unveiling ceremonry as he excavates an ancient archeological site. But after a lengthy train ride into Europe, you realize the town you arrive in is suspiciously devoid of all life.

And in the equally-deserted hotel your brother rented for you, you discover a pistol in your bedroom. And suddenly there are zombies; which you instantly dispatch given your expertise as a soldier, but on the trail for clues you entered the local church, and meets an angelic figure who calls herself the Angel of Faith, who informs you that your brother - as well as the town's entire populace - has been dragged into the Netherworld after disturbing the peace between angels and demons.

Determined to retrieve your brother, you volunteer on a mission into the realm of the supernatural, with the Angel of Faith as your guide as she bestows you a holy sword and imbues the soul of her demonic servant into you...

Besides the usual action game format where you alternate between slicing up enemies or shooting them, you're also granted the ability to unleash the demon implanted inside you by the Angel of Faith, turning you into a monstrous form for a few seconds; you're only allowed melee attacks in this form, but your strenght have been enhanced to the point where you deal multiple damage with each hit. You return to human form after a while, and can return to demon form at the cost of your Mana, which you can recharge by stabbing your sword into magical beacons identified by glowing lights on the floor.

"I have transported you through time and space - out of the world you have known. Because it is only here that one can find the truth. Seek the truth. Discover it!"