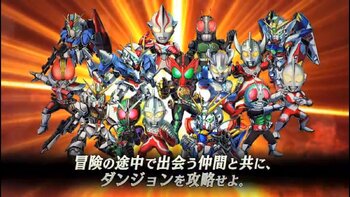 Lost Heroes is a turn-based RPG released for the Sony PlayStation Portable on September 6, 2012, as well as Nintendo 3DS on December 13 of the same year. It is part of the Ultra Series, Kamen Rider, and Gundam crossover game franchise, the Compati Heroes series.

Heroes from various worlds wake up in an unknown location, and what's more, their enemies are here as well. Worst still, the heroes have found that their powers have been lost. Nontheless, they work together to regain their strength, stop the plots of the villains, and return home.

A sequel, Lost Heroes 2, was later released for the Nintendo 3DS on February 5, 2015, continuing from the original's story, alongside a downloadable re-release of the original game with improved game balance(titled Lost Heroes BONUS EDITION). The sequel features the return of Mebius, Zero, W, OOO, God Gundam, and 00 Raiser as playable characters.

Notably, both 2 and BONUS EDITION include voices for the playable characters.