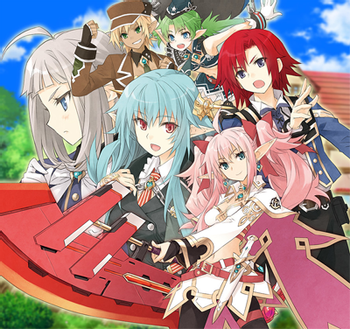 Do you have the power? Are you the one?
Advertisement:

Lord of Magna: Maiden Heaven is a Turn-Based Strategy game from the makers of Harvest Moon and Rune Factory. released on June 2nd, 2015 for Nintendo 3DS. Gameplay-wise, it's primarily notable for its "bowling" mechanic, in which Mooks can be knocked into each other to create combos not unlike a Beat 'em Up. Obviously, the game is fairly action-based for a Strategy RPG.

Luchs Eduard is the proprietor of an inn on the outskirts of Lunéville on Étoile Island clinging to a code of honor passed down from father to son for generations: "When our cherished guests finally arrive, think of them as nothing less than family." However, due to the island's strict policy of isolationism, the inn has had no visitors since its founding. Thus, Luchs is forced to mine for crystals, an extremely valuable resource due to their immense utility, to sell, in order to make ends meet. During one of his routine excavations, Luchs stumbles upon an amnesiac girl encased inside a massive crystal, and her abrupt awakening triggers a series of unexpected events that include foul fiends, astonishing abilities, and various other mysteries.