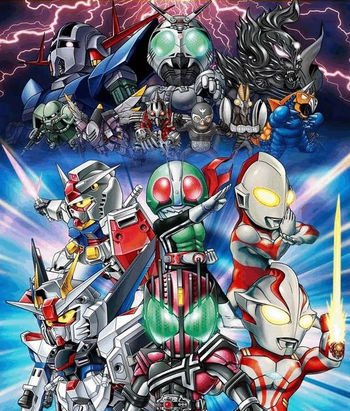 Great Battle Fullblast is an platforming Action Game developed by Inti Creates and released on the Sony PlayStation Portable on March 1, 2012. It is the first game in the Great Battle series to be released in the 21st century, and the first game in the Compati Heroes series to be released in over a decade. In classic Compati Heroes fashion, it is a crossover of Gundam, Kamen Rider, and the Ultra Series.

Brought to ruin from war after war, Planet Iris lets out a mysterious voice, breaking the walls between dimensions and calling forth the Rider Planet, the Ultra Planet, and the Gundam Planet. Then, emerging from the summoned worlds, Dai-Shocker, the Kaiju Army, and the Zeon/ZAFT Alliance, have joined forces to invade Iris and harness its power for their own ambitions. In order to stop them, the heroes of the summoned world's gather together.