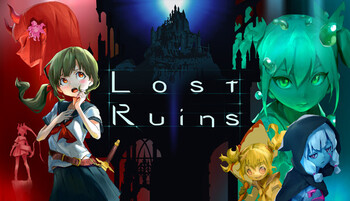 on Kickstarter, the publishing rights went to Dangen Entertainment, and the game was released in May 2021 for PC through Steam and GOG, with PlayStation 4, Nintendo Switch, and Xbox One versions announced for later in the year.
Advertisement:

A young girl wakes up in a dimly lit dungeon without any of her memories. Surrounded by horrible, bloodthirsty monsters, she is rescued by a mysterious magician, Beatrice. With Beatrice's help, the girl goes on a perilous journey to find answers and unlock the secrets of the Lost Ruins.