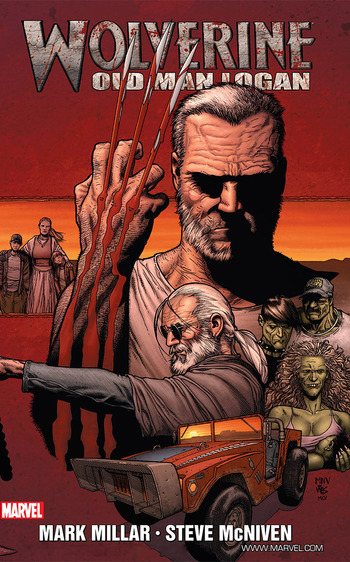 Did grandpa told you about his old adventures?
Old Man Logan is the name of a Marvel Comics storyline written by Mark Millar with art by Steve McNiven, featuring Wolverine and set in an Alternate Universe/Bad Future.
Advertisement:

The original storyline is an eight-chapter story written by Mark Millar with art by Steve McNiven, set in an Alternate Universe/Bad Future where the villains of the Marvel Universe took over the United States and divided it up into territories. A now pacifist Logan lives with his new family in "Hulkland" (formerly, The Abomination's Territory, formerly California) where the inbred children of an evil Hulk are the lords of the land. Logan is short on the rent, and must team up with a now blind Hawkeye to deliver a mysterious cargo in order to help keep his landlords from killing him and his family.

The storyline was used as the basis for the third Wolverine movie, Logan - although, given that the story greatly relies upon story elements that Fox didn't own the film rights to at the time, the film is a Pragmatic Adaptation that is much more grounded in nature.

Several later comics (not all of them focused on Logan) were released later, taking place in the setting. See The Wastelands for details about the larger franchise.