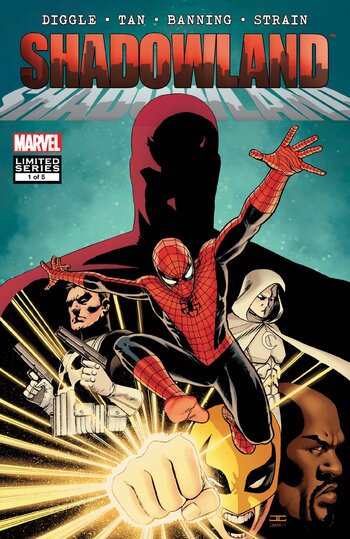 Shadowland is a Marvel Comics crossover published in 2010.

Set after the events of Siege, Shadowland follows Daredevil and his life after his Face–Heel Turn.

The series is divided into a five-part miniseries, a three-part Moon Knight mini, a four-part mini about a new Power Man and a few one-shots following Bullseye, Elektra, Ghost Rider and Spider-Man, plus tie-ins to other titles, including Thunderbolts.

After Matt Murdock became the leader of the Hand, it was his turn to take over New York City. Matt slowly begins to show that he's Jumped Off The Slippery Slope, first by building a temple/prison in Hell's Kitchen (the eponymous "Shadowland") and then by killing Bullseye. Eventually, it's revealed that Daredevil has actually been possessed by a demon called "the Beast." When Iron Fist manages to exorcise it from Matt's body, Matt kills himself before it can take control again. In the aftermath, Elektra steals his body to resurrect him like she was once resurrected.