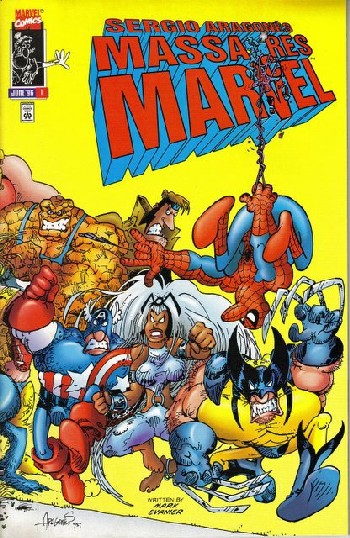 Sergio Aragonés Massacres Marvel is a parody of characters from Marvel comics, written by Sergio Aragonés. As if you couldn't guess it yourself...

Sergio Aragonés and Mark Evanier pay a visit to the Marvel Comics' headquarters. There's nobody at home, Stan and Jack are nowhere to be seen. Sergio has a look on the work of the current artists, and suddenly finds a note for them. All comic books are behind schedule! They must be finished in time, or some heads are gonna roll! Oh, no! What would happen with Wally Wood or Don Heck? So, Sergio becomes the hero of the day, and makes all the comics himself.

He begins with the Watcher. The Watcher has seen hurricanes, tornadoes, Michael Jackson getting divorced, a mysterious "Seagoing Soarer" kidnapping Namor, and Mr. Saturday Night on Cinemax. Then, the Fantastic Four. The Thing is leaving the FF, but the others won't let him, as it's not his turn; then everybody else tries to leave the group: the Human Torch, the Invisible Woman, Mr. Fantastic, a random lawyer that tries to sue him, Daredevil, Iron Man, Thor, Dr. Doom... and finally, the Seagoing Soarer (remember him?) kidnaps the group.

Spider-Man is very sad, as always, so he remembers his origin story. He fights with Dr. Octopus, who has several clones of him, and the Seagoing Soarer takes him as well. Then he finds the Grey Hulk in the desert, and adds him to his collection. The Silver Surfer has nothing to do with his life, until Galactus shows up... but he won't eat Earth, as he's a bit fat, so he leaves to find some small low-cholesterol moon. He gladly accepts being captured by the Seagoing Soarer, so he can whine about his captivity. He didn't take the Avengers, though: Captain America, thinking that the world is without hope, froze himself to the year 2099, and the others saw he had a point and froze themselves as well. And finally, Wolverine and Storm of the X-Men.