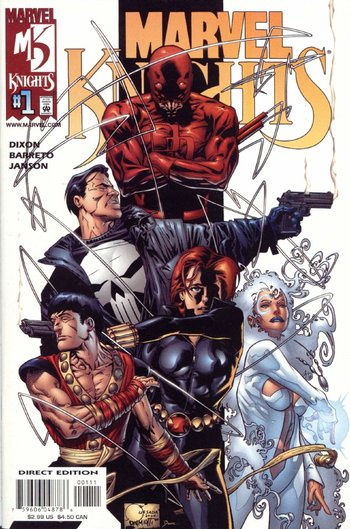 The Marvel Knights, who were also a team, kind of.
Advertisement:

Marvel Knights was an Imprint of Marvel Comics created in 1998.

Back in 1996, Marvel, on the brink of bankruptcy, outsourced some of its most popular titles to Image Comics in an event called Heroes Reborn. This experiment turned out to be a failure and all of the books returned back to Marvel after a single year. But in 1998, after Marvel finally filed for Chapter 11 bankruptcy, Joe Quesada and Jimmy Palmiotti, the creators of the much smaller Event Comics, were tasked by Marvel to take some of their lowest selling books and relaunch them. Quesada would pick the creative teams and edit the books and Marvel would publish them.

They started with four books: Daredevil, The Inhumans, The Punisher, and Black Panther. Quesada chose indie writers and artists for the books, creators who liked to experiment with the medium. More specifically, Brian Michael Bendis and David Mack were put on Daredevil, where Bendis had a critically acclaimed run, while, after a rough start with The Punisher, Garth Ennis and Steve Dillon were put on the book and quickly made it critically and financially popular. The twelve-issue Inhumans mini-series by Paul Jenkins and Jae Lee became a cult classic, while Christopher Priest's Black Panther became well known for its humor and intricate plotting.

In 2013, the Marvel Knights Imprint officially became dormant, but it was revived in 2018 for Marvel Knights 20th, a six-issue mini-series that also serves as a 20th anniversary Milestone Celebration.

Compare Marvel MAX, which was another Marvel Imprint created to be more mature.