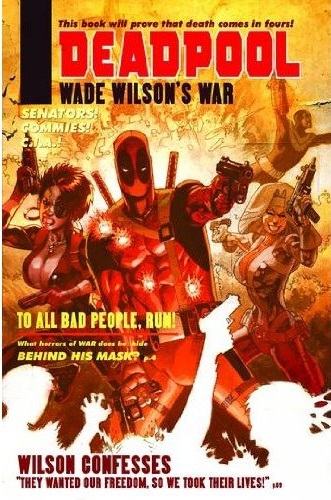 They wanted our freedom, so we took their lives!
"You know, sometimes it feels like I'm the only one who can see the truth. That life is just an absurdist comedy. And the only appropriate response is to laugh."
— Deadpool, the man himself.
Advertisement:

A 2011 Marvel Knights miniseries that stars a different version of Deadpool, as well as Domino, Bullseye, and Silver Sable. Written by Duane Swierczynski.

It starts with a Senate hearing about the recent massacre of a drug cartel and a load of civilians in the town of Sinaloa, Mexico. The Senate has an expert witness, however: not just a witness, he claims that he was one of the mercenaries that took down the drug cartel, a man named Wade Wilson, but who prefers the name 'Deadpool'.

Deadpool then proceeds to spin out a story about a black-ops team so secret it didn't even have a name, just a letter: X. The members of this team (the aforementioned Domino, Bullseye, Silver Sable, and, of course, Deadpool) did things for the US Government that it didn't want official records on.

Or did they? Is Deadpool really lying? What really went down in Sinaloa? And where is Domino now? And what is the truth?