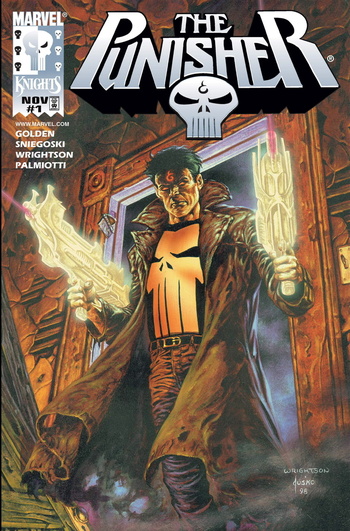 "Hey, you got your Todd McFarlane in my Punisher!"
"You got your Punisher in my Todd McFarlane!"
Deadpool: The feather — it's like it knew you — like it wanted to be near you, to help you. But it's from an angel. Why would an angel feather care about you, Castle?
Punisher: I don't want to talk about it.
— Thunderbolts Vol. 2, #22 (2014)
Advertisement:

The Punisher (subtitled Purgatory for collected editions and interior titles) is a 1998 comic book miniseries, released by the Marvel Knights imprint of Marvel Comics.

The series, set in the shared Marvel Universe, stars the eponymous Punisher, reinventing the Badass Normal vigilante as a supernatural being.

Some time ago, Frank Castle killed himself. But he came back with strange divine powers, and uses them in his war against crime. He is then pulled into a conflict between angels and a power-hungry demon, and learns the truth behind his work as a vigilante.

This iteration of Punisher appeared for the second (and last) time in a crossover miniseries with Wolverine, subtitled Revelation.

The Punisher: Purgatory provides examples of: