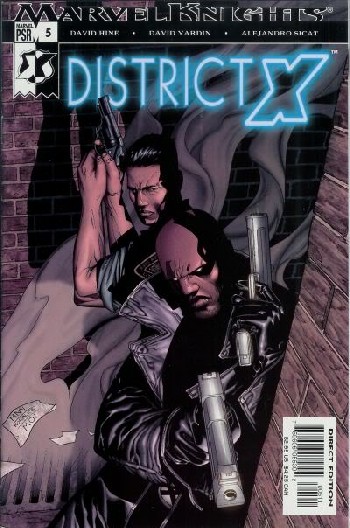 Turn the right corner in Mutant Town and you can find anything...
Advertisement:

District X was a short lived comic book series by David Hine that ran from 2004 to 2005. It takes place in "District X", also known as "Mutant town", a neighborhood in New York City where most of the people are mutants. The main characters are two cops, the human Ismael "Izzy" Ortega, and Lucas Bishop from the X-Men, replacing Izzy's hospitalised partner Gus Kucharsky.

The series was a police procedural, rather than a superhero comic. Mutants are not heroes or villains, just common urban people (cops, neighbours, petty thieves, "totally radical" teenagers, vagrants, etc) who simply happen to have weird super powers. There are almost no superhero costumes involved (not even Bishop, he goes around in normal police uniform).

The series had a Spiritual Successor called "Mutopia X", a tie-in with the crossover House of M, where Mutant Town becomes like the Hollywood of the new alternative reality.