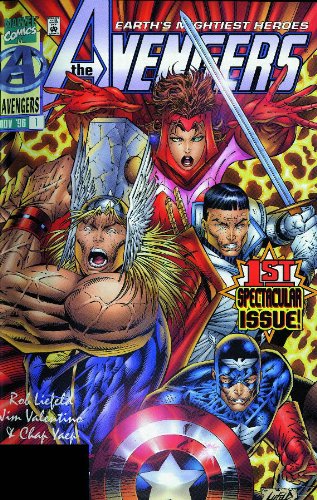 Everything that was wrong with "Heroes Reborn" in a single image, beyond the apparent Youngblood's Disease.note The very small, white eyes
Heroes Reborn was a 1996-1997 crossover story arc among comic-book series published by the American company Marvel Comics. During this one-year, multi-title story arc, Marvel temporarily outsourced the production of several of its most famous comic books to the studios of its popular former employees Jim Lee and Rob Liefeld.
Advertisement:

Following the apparent deaths of The Avengers, Fantastic Four, and Doctor Doom, who died battling Onslaught in Onslaught: Marvel Universe, they were "reborn" and certain aspects of their earlier stories were expanded with the intent of telling their adventures anew for modern generations. This was eventually explained, in-story, as their having been transported into a pocket universe by Franklin Richards, the near-omnipotent, psychic son of Mr. Fantastic and the Invisible Woman, to save them, where they lived in the so-called "Franklin-verse", oblivious to what had happened to them. Once the contract for the titles expired, the heroes were brought back to the mainstream Marvel Universe in the miniseries Heroes Reborn: The Return (or simply Heroes Return).

Doctor Doom returned to this universe in a series of one shots and found it in ruins with supervillains running rampant. He eventually managed to bring this Earth into the main Marvel Universe, taking the position of its new Counter-Earth.

Not to be confused with Heroes Reborn, the Sequel Series to Heroes.