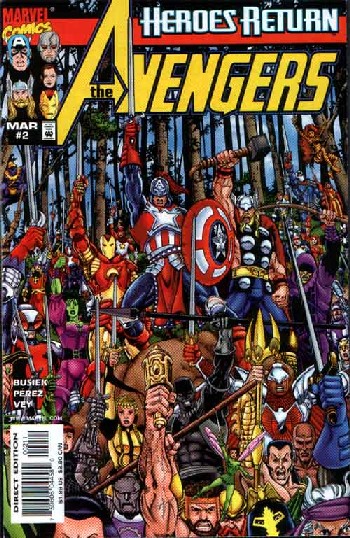 Queen's Vengeance, assemble!
Heroes Return is a storyline of The Avengers, with the reunification of the team after Heroes Reborn.
Advertisement:

All those who were once Avengers, everywhere around the world, are suddenly attacked by Asgardian creatures, who vanish at the same time. Iron Man, Captain America, Giant Man and the Wasp meet at the mansion to discuss what's going on; Thor (whose wereabouts were still unknown) appears there as well, announcing a great crisis. All the former Avengers are summoned, and Thor explains that all living beings in Asgard have dissapeared, for reasons unknown. But Thor noticed a bigger problem: the giant sword of Ragnarok was missing, as well as the Norn Stones. The Avengers divide into four groups to search for the stones and the sword. It turns out to be a plot of Morgan Le Fey and Mordred, who manipulated the Avengers to send teams in order to capture the Scarlet Witch, and then be able to exploit her magic to be able to use the sword to reshape reality.

In the new reality, Morgan Le Fey is the absolute queen of a world in the middle ages. The Avengers are now the "Queen's Vengeance", their suits, powers and origins are redesigned for the middle ages, and they are brainwashed into being the Queen's servants. The Scarlet Witch is the exception: she is still herself, and she's kept chained in a cell. She begins to use her magic to summon help, and had some success: "Yeoman America" (Captain America) recovers his memory. He forces "Longbow" (Hawkeye) to remember, and they begin to try to make the others remember as well. But the spell is strong, and not all of them remember their real lives. After a big fight, the awakened Avengers (Captain America, Hawkeye, Thor, Photon, the Wasp, Quasar and Justice) escape to the forest. And the Scarlet Witch finally summons Wonder Man back from the dead, who liberates her.

The Avengers return to the castle, and another fight begins. The Scarlet Witch shows up as well, and begins a magic duel with Morgan Le Fay. But Le Fay is stronger... until Wonder Man shows up again. And, with her attention focused on the 2 threats, all the members of the "Queen's Vengeance" begin to recover their memories, and add their forces to Wanda's. She's finally defeated, and the world returns to normal.

But that does leave the question of what they're going to do with thirty-nine Avengers...