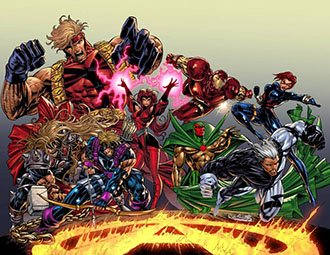 The Crossing is a story arc of The Avengers which also crossed over the Iron Man, Force Works and War Machine titles.

Rita DeMara (the second Yellowjacket) returns from the future to the present day after she finds a Bad Future where Hawkeye is killed and Black Widow is about to be executed, with the implication of both being the last Avengers left. When she arrives to the present-day Avengers Mansion, she finds one of the Avengers and tries to tell him what she saw, only to be promptly killed.

The following day, during an anniversary party of the Avengers, they face Kang the Conqueror's forces who were following an old man, who they recognize as an aged Gilgamesh. Later that night, the babysitter Marilla is killed. When the Avengers find her body, they must face the possibility of an Avenger being her murderer.

The Crossing contains examples of: