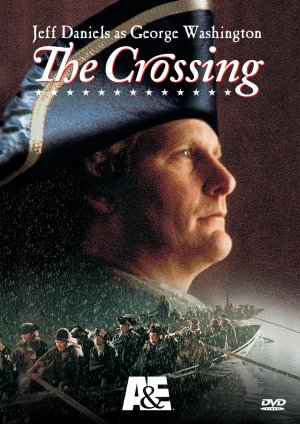 "Washington needed a victory, they got a miracle."
Advertisement:

The Crossing is a 2000 made-for-TV movie that aired on A&E, depicting the first Battle of Trenton in The American Revolution. It stars Jeff Daniels as George Washington and follows him through December, 1776 as he tries to find a way to save his army and the Revolution from disintegration after a desperate retreat across the Delaware.

There are no British troops immediately in the vicinity, their commander having deemed the Continentals too pathetic to bother with, leaving instead a force of 1200 Hessians—around the numbers that Washington can drum up from the other generals. He decides to cross the Delaware on Christmas night and ambush the Hessians, a plan that everyone thinks is crazy. But with enlistments set to expire at the end of the year, Washington sees no other choice if the Revolution is to continue at all.

Although it takes some liberties with the facts of the battle (see Hollywood History for details) The Crossing takes a distinctly human view of the struggle. The Continental Army is portrayed not as a plucky band of irregulars but a weary, demoralized remnant in dire need of supplies and a boost to morale. Washington, who is known for being mythologized as much as he is for his historical significance, is shown as a human being who is frustrated and at his wits' end trying to keep what's left of his army from disintegrating while his generals, loyal and plotters alike, question his admittedly desperate plan. The result makes it clear how close the Revolution came to dying before it was even a year old, which makes the victory at Trenton even more impressive.