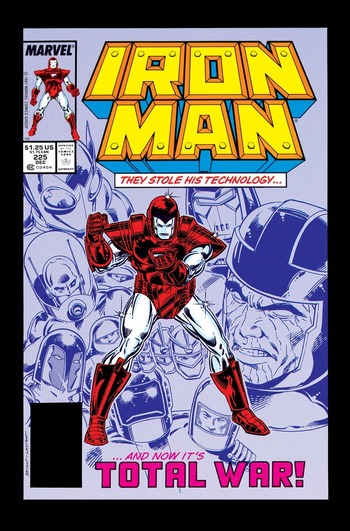 Original armor, do not steal.
Advertisement:

What do you do when you find that your secret armor technology has been stolen? You track down each piece and destroy it, of course.

Armor Wars (originally referred to as "Stark Wars") was a seven-issue Iron Man storyline running in Iron Man #225 to #232 (December 1987 to July 1988), detailing the exploits of the Golden Avenger in trying to rescue his technology.

Tony Stark, analyzing Force's own armor, realizes that it is based off his own Iron Man technology, which had been kept secret. Compiling a list of possible suspects, he draws up a list comprising of Beetle, Shockwave, Doctor Doom, Stilt-Man, the Crimson Dynamo, Controller, Mauler, Professor Power, Titanium Man, the Raiders, and many more. Now all he has to do is to find out just how many villains have been using Stark technology, and get it back by force if necessary.

The arc was adapted into a two-parter in the second season of Iron Man: The Animated Series with various changes made. A live-action Disney+ series based on this storyline was announced for the Marvel Cinematic Universe in December 2020, with Don Cheadle set to reprise his role as War Machine, taking Tony's place as the main character. In September 2022, it was revealed that Marvel were redeveloping the planned series into a feature film.