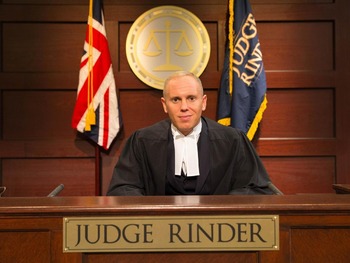 “The problem is, there’s a lovely phrase, which, let me tell you, in Darlington they think of nothing else, it’s called Caveat Emptor.”

Launching on ITV on 11 August 2014 and airing every weekday at 2 pm, Judge Rinder is basically a televised version of an English small claims court. Robert Rinder

(himself a very experienced defence barrister; he's never actually been a judge, something he freely admits) presides over the sort of cases that Judith Sheindlin does; dodgy cars, dodgy wedding photos and other consumer stuff like that. Rinder himself combines high snarkiness with high camp.

Each episode is an hour long and features two or three cases.