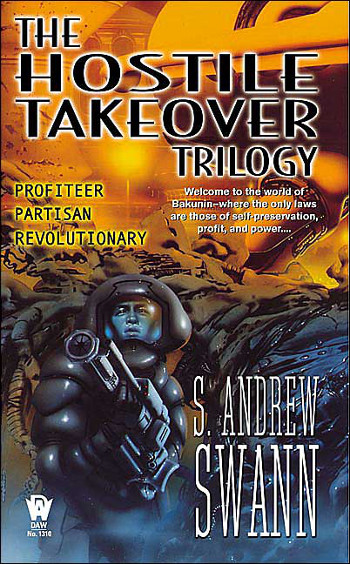 Welcome to the world of Bakunin—where the only laws are those of self-preservation, profit and power...
The Hostile Takeover trilogy by S.A. Swann consists of Profiteer, Partisan, and Revolutionary. This series is part of the Terran Confederacy Verse.
Advertisement:

Three centuries after the events of the Moreau Series, Earth has colonized 84 planets. 83 of them are divided among the 5 arms of the Confederacy, which claims authority over all Terran sapients. The 84th is the planet of Bakunin, which has no government that could sign the Confederate Charter and won't stand for any such thing to exist. Bakunin's billion-odd people (there's no census) are divided among dozens of communes, each devoted to some religion, ideology, philosopy, or personality, as well as the cities, run by one or more feuding corporations.

The Confederacy is tired of Bakunin's intransigence, and various factions see power for themselves if Bakunin is counted as one of their own, so Colonel Klaus Dacham of the Terran Executive Command is given the task of bringing the world to heel. The laws of the Confederacy prohibit outright invasion, so Dacham is tasked with subversion and recruitment of local forces to achieve the Confederacy's goals, and his only limit is that he must not be caught doing anything illegal.

On Bakunin, arms magnate Dominic Magnus finds his company, Godwin Arms the first target in Dacham's war, and feels the long arm of his past reaching out to gather him back in. Once an officer in the TEC himself, he initially believes the attack to be a personal vendetta, and when he realizes the scope of it, no-one else can do anything to stop it. Meanwhile, the genetically engineered hacker Tetsami has stolen the data that will buy finally buy her a ticket offworld. All she needs to do is hand it over to the rep from Godwin Arms and get her payment. A simple job turns into a maelstrom of massive forces, and it's all she can do to stay afloat.

Not to be confused with the novel by Susan Shwartz.