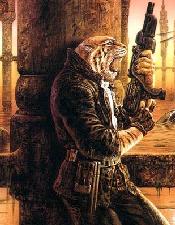 Nohar Rajasthan
A 4 book Bio Punk series by S. Andrew Swann, consisting of Forests of the Night, Emperors of the Twilight, Specters of the Dawn, and Fearful Symmetries. The first three books have been reprinted as The Moreau Omnibus. This series is part of the Terran Confederacy Verse.
Advertisement:

The series takes place in the mid-21st century, after the Third Gulf war, the Pan-Asian war, and various smaller conflicts led to the creation of 'Moreaus', genetically engineered anthropomorphic animals, as well as the altered human 'Frankensteins' created by a few outlaw states. After the wars, moreau refugees flood into the U.S., where they are treated as second-class citizens, but better off than the franks, who have no civil rights at all under the 29th amendment.

Forests of the Night centers on Nohar Rajasthan, a genetically engineered tiger who works as a PI in Cleveland. He is hired by a secretive group of frankensteins to investigate the murder of a conservative political operative which the police are blowing off. In the course of the investigation, bodies begin to pile up, strange links appear between a rodent street gang and anti-moreau politicians, and evidence piles up that there's far more going on than is visible on the surface. Nohar encounters frankenstein Federal agent Evi Isham and rabbit gang leader Angel Lopez.

Emperors of the Twilight opens six years later, when Evi Isham, long out of field operations, is attacked by snipers and canine mercenaries in her New York apartment. The conspiracy she helped to root out in Cleveland has far-reaching tentacles and is not nearly as dead as she supposed. Her boss is conspiring against her, the Agency thinks she's gone rogue, and Evi is forced to turn to the very people she used to hunt, the moreau underground, in her search for answers.

Specters of the Dawn follows Angel Lopez to San Francisco, fabled haven of tolerance for moreykind. But that tolerance runs thin when she's attacked in a bar by human supremacists, who two weeks later are implicated in the murder of her lover, a wealthy fox named Byron. Angel learns that the humans are being railroaded, and Byron was killed by a moreau. Investigating Byron's mysterious job, and more mysterious death, Angel finds a trail of destruction created by at least three factions, all of whom are seeking something Byron had and believe that she has now.

Fearful Symmetries returns to Nohar, retired and fled from human and moreau society alike. A human lawyer tracks him down and offers him one last job, which Nohar turns down flat. That would have been the end of it, except that someone firebombed Nohar's cabin that night, and he must learn who offered the job if he wants to survive.

, in which the protagonist is a Moreau trying to survive in a "Moreytown" slum amidst rising tensions and violence.