It's the Only Way to Be Sure 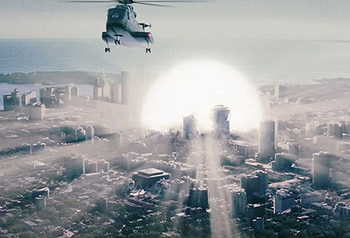 Cleanse.note It failed.
Pi: There are so many possibilities... I'd have to requisition some ordnance, sir.
Tagon: You are not allowed to nuke Northport "just to be sure."
Pi: I'd have to nuke a lot more than just Northport to be really sure.
— Schlock Mercenary, on defending Northport
Advertisement:

The Virus, The Plague, or some similar infestation or contaminant has gotten out of containment and threatens to spread uncontrollably. If any conventional means have been deployed to control it, they were grossly inadequate. The danger is now severe enough that Plan B - maybe even Plan A - is sheer Overkill: a local armageddon which will destroy the facility, city, or entire region in one blast, ensuring that not a single trace remains to kick off the epidemic all over again. It could be a nuke, it could be a thermobaric explosive, it could be Orbital Bombardment - but whatever it is, high civilian or friendly casualties are almost certain, and are chalked off as "acceptable losses".

Possibly justified in that if the situation is bad enough to warrant this level of action, anyone within the affected radius not heavily coated in Plot Armor is likely either dead or soon to die anyway, and if the plan works it can at least result in a Pyrrhic Victory. Often a Shoot the Dog moment, sometimes followed by a What the Hell, Hero? moment. Rarely it can be a Hell Yeah moment if collateral damage isn't an issue note or is left to be Fridge Horror and it at least seems to work.

Sometimes this strategy works, sometimes it doesn't, and sometimes it really doesn't work. See Feed It a Bomb for similar philosophy of pest-control on a smaller scale, Hurl It into the Sun when you bring the target to the cleansing fires instead of the other way around, and Fiery Coverup for when the bombardment is intended to cover up the evidence as much or more than it is to destroy the threat. Compare Godzilla Threshold.

Alternative Title(s): The Only Way To Be Sure