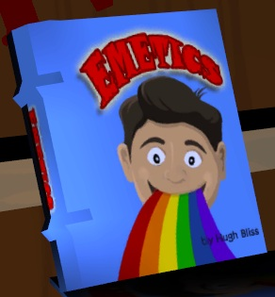 You'll be so happy, you'll puke rainbows!
The Church of Scientology has a reputation for being very protective of its public image, and of being extraordinarily sensitive to what it considers defamation. This has been demonstrated by the church breaking out the lawyers to suppress any potential source of mockery by lawsuit, along with private investigators to dig up dirt on them (or in the past, even framing critics for various crimes).

Naturally, this just makes them easier to mock.

Lampooning this religion directly, or even uttering its name and a word against it, may expose unwary parodists to severe civil penalties. Parodies therefore frequently use a "Church Of Happyology", a stand-in religion that is well enough veiled to stave off lawsuits, but still transparent enough to allow clued-in people to identify the actual target.

You can tell a Happyology-style parody religion from another Parody Religion by the presence of celebrity characters trampolining on couches, an evil alien overlord, and devices that are sort of like lie detectors being used for counseling sessions.

See also Cult, Religion of Evil, Path of Inspiration, Corrupt Church, and Scam Religion. Compare Church of Saint Genericus. Compare and contrast Scout-Out and other forms of Writing Around Trademarks.

Founded by Com Truise, Religitology worships Herman, the creator of the universe. They apparently regularly practice brainwashing and needless mass-killing for conversion, brainwashing Anthony and turning him into a Manchurian agent.

Founded by Com Truise, Religitology worships Herman, the creator of the universe. They apparently regularly practice brainwashing and needless mass-killing for conversion, brainwashing Anthony and turning him into a Manchurian agent.