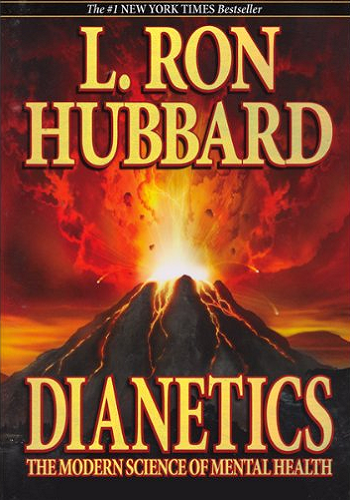 Just an everyday mental health book with a volcano eruption on the cover!
Dianetics: The Modern Science of Mental Health is L. Ron Hubbard's self-help booklet, proverbial to Scientology and one of the most sold self-help books out there. How much of this is because of his followers buying massive quantities of it in order to artificially boost sales is an exercise left to the reader's imagination.
Advertisement:

Very briefly, the book proposes the idea that everyone unconsciously carries a physical pain or painful emotions that must be repressed in order to achieve self-fulfilment. The rest of the book gives you tips to do it.

Dianetics has examples of the following tropes: