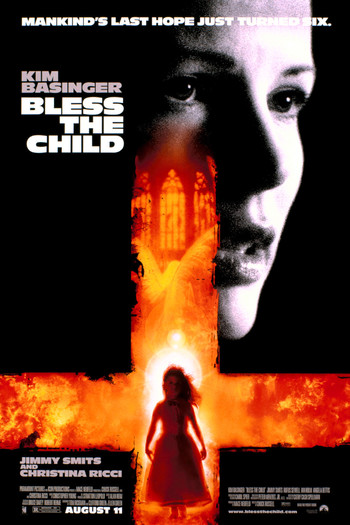 A 2000 horror/thriller film adapted from the novel by Cathy Cash Spellman, directed by Chuck Russell and starring Kim Basinger, about a mother and her adopted child — who just happens to be the messiah.

Maggie O'Connor (Basinger) is a nurse who one night gets a brief visit from her drug-addicted sister Jenna (Angela Bettis), who drops off her newborn daughter Cody. Fast forward a number of years, and Cody (Holliston Coleman) is in a Catholic school for disabled children. She is believed to have a form of autism, but it is indicated that she has started to develop supernatural powers - making plates levitate, and more importantly resurrecting a dead bird. Things are going well.

Then, one day, Jenna comes back to claim her child. Or rather, Jenna's new husband Eric (Rufus Sewell) has come to claim his new wife's child...

Tropes exclusive to the novel: