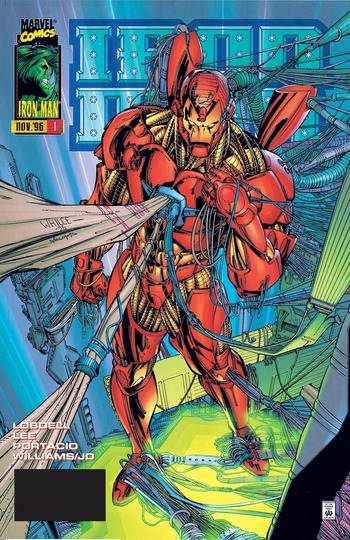 "Battery charge: 5%". Let's hope that Stark is not taking a nap inside there...
Iron Man was relaunched in 1996 in an Ultimate Universe, the Heroes Reborn project. The comic was managed by Jim Lee and Scott Lobdell.
Advertisement:

Things start during a testing of the "Promotheus" armor, an Iron Man armor prototype, that causes the death of the pilot, Rebel. The company of Tony Stark is sued because of it, but he manages to be acquitted. Still, this causes an uproar among his workers and the common people, who despise Tony Stark because Aristocrats Are Evil. One of them manages to sneak into the place and detonate the Gamma bomb created by Bruce Banner. Banner manages to prevent a destructive explosion, but not the explosion itself, and gets poisoned by gamma radiation. Instead of dying, that turned him into the Hulk. Hulk felled Stark's helicopter; he survived, but loses blood and the shrapnel may kill him if it reaches his heart. So he sneaks into the testing grounds and dons the Prometheus armor.

Marvel intended the Heroes Reborn project to continue, but it was canceled because of creative differences with Jim Lee. The characters were then returned to the Marvel Universe and relaunched.

This comic series provided examples of...