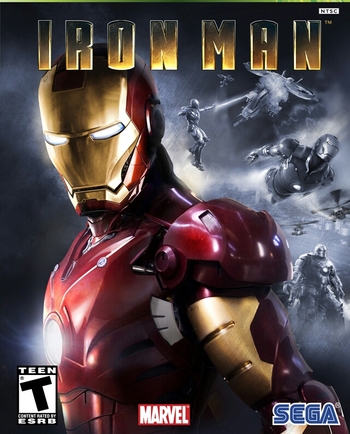 Iron Man is an Action-Adventure video game published by Sega, based on the 2008 film starring the eponymous Marvel superhero.

Following the basic plot of the movie, the player takes control of the brilliant weapons manufacturer Tony Stark, who ends up captured by the terrorist organization known as the Ten Rings. Held captive alongside fellow scientist Ho Yinsen, Stark secretly develops a mechanical suit of armour to escape at the cost of Yinsen's life. Realizing the devastation his weapons have wrought firsthand, Tony vows to track down and destroy the remaining supplies held by his former clients; the criminal organizations of the Maggia and AIM. Robert Downey Jr., Terrence Howard, and Shaun Toub reprise their roles from the filmnote Although Stephen Stanton takes over the role of Iron Man whenever Tony dons the suit.

Not to be confused with the virtual reality game, Iron Man VR.