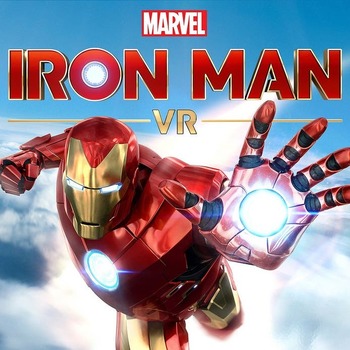 YOU are Iron Man.
Advertisement:

Iron Man VR is a virtual reality game released for Playstation VR on July 3rd, 2020, developed by Camouflaj and published by Sony Interactive Entertainment, and draws from both the Iron Man and The Avengers comics, as well as the Marvel Cinematic Universe.

Five years after Stark Industries ceases weapons production and he becomes Iron Man, Tony Stark is on a routine plane trip with Pepper Potts when their jet comes under attack by old Stark Industries combat drones controlled by someone calling herself Ghost. Tony suits up to fight them off and quickly comes to learn that sometimes, ghosts do come back to haunt you.