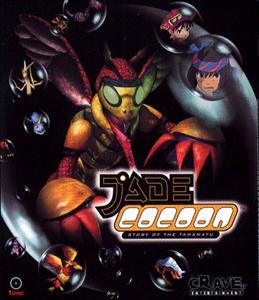 "Our enemy we love and for the tormented we pray. Grant us, the Beasts of Knowledge, the power to touch the spirit."
Advertisement:

The Jade Cocoon series (Tamamayu Monogatari in Japanese) currently consists of two games that revolve around capturing Mons and having them fight for you. The series was developed by Genki, with character designs by Studio Ghibli artist Katsuya Kondo, who was also the animation director.

The first game's premise has the protagonist Levant sent into the divine forest to find a cure for a deadly sleep-sickness brought to his village by demon locusts.

The second game, set a century after the end of the first, has Idiot Hero Kahu attempting to cure himself of a nasty curse which threatens to consume his mind.