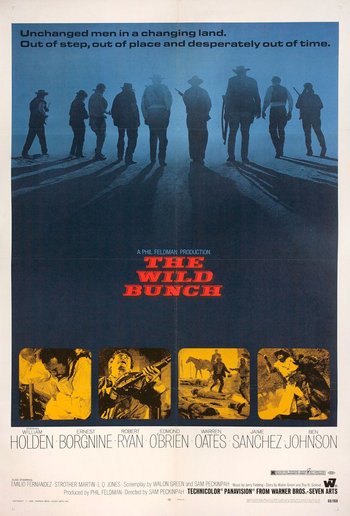 The Wild Bunch is a classic 1969 Western film directed by Sam Peckinpah, starring William Holden, Ernest Borgnine and Robert Ryan. It was quite controversial because of its violence.

Pike Bishop (Holden) is the leader of a gang of aging outlaws in the Twilight of the Old West. At the beginning of the film, they rob a railroad office (the page quote is uttered here). However, Pike's former partner Deke Thornton (Ryan) has been deputized to capture him, and his posse of bounty hunters ambushes the gang in a bloody shootout. The surviving members of the gang—Pike, Dutch Engstrom (Borgnine), the Gorch brothers Lyle (Warren Oates) and Tector (Ben Johnson), and Angel (Jaime Sánchez)—escape to Mexico, where they join up with old-timer Freddie Sykes (Edmond O'Brien) and accept a deal to procure guns for the corrupt General Mapache (Emilio Fernández), whose men are fighting off Pancho Villa's revolutionary forces. Meanwhile, Deke, who still admires Pike but has been given an ultimatum to either capture (or kill) the gang or go to prison, follows them. Things end up getting violent.

Shockingly violent, gorgeously photographed, brutally cynical, The Wild Bunch is perhaps the ultimate deconstruction of The Western, and a true classic of 20th-century filmmaking. Did we mention that it's pretty violent too?

The Wild Bunch contains examples of: