Film / Wild Boys of the Road 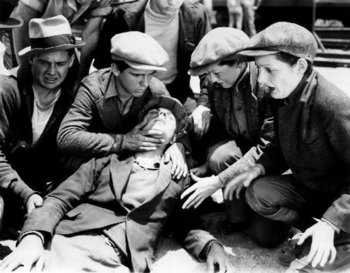 Andy Hardy never had to worry about stuff like this.
"You say you've got to send us to jail to keep us off the streets. Well, that's a lie. You're sending us to jail because you don't want to see us. You want to forget us. But you can't do it because I'm not the only one. There's thousands just like me, and there's more hitting the road every day."
Advertisement:

Wild Boys of the Road is a 1933 drama directed by William A. Wellman, about the plight of homeless teenagers during The Great Depression.

Eddie and Tommy are high school students and best friends in some small town in Flyover Country. Tommy shamefully admits to Eddie that he and his widowed mother are completely broke and subsisting on charity from the town's community chest. Eddie vows to help his buddy get work, but soon after this Eddie's own father loses his job. With their parents unable to feed them, Eddie and Tommy resolve to go out on the road as tramps and look for work.

Eddie and Tommy start riding the rails, where they meet Sally, a feisty girl who is in similar straits and is trying to get to Chicago to stay with her aunt. Unfortunately Sally's aunt gets arrested, leaving the kids again with nowhere to go. They embark on a harrowing ordeal in which they beg and scrounge and look for food while traveling from Chicago to Cleveland to New York, dodging railroad goons and fighting with police along the way.